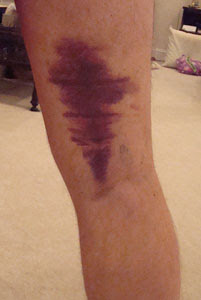 Prognosis:
A grade one strain is the most common and is what is usually referred to as a “pulled hammy.”  These should still be taken seriously in the first 3-5 days as it doesn’t take much to turn a grade one strain into a grade two, or a grade two strain into a grade three. As a general rule, grade one hamstring strains should be rested from competitive sporting activity for about 3 weeks and grade two injuries for about 4 to 6 weeks. In the case of a complete rupture, the muscle will have to be repaired surgically and the rehabilitation afterwards will take about 3 months.

If you know any athletes you know that these general rules are almost impossible to enforce when there is a game to be played.  For that reason let’s explore some techniques to accelerate this lengthy and tedious healing curve.

Posted in Blog, Conditions
← What is an Exertional Headache?Clubbells and Indian Clubs: Legit Rehab Tools or Passing Fitness Fads? →